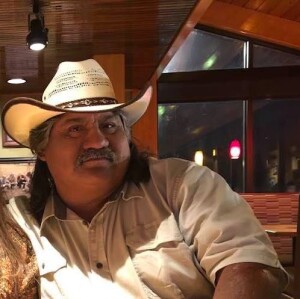 Guadalupe “Lupe” Torres, 58, returned to his heavenly home on December 1, 2020. Lupe was born to the late Nasario Torres and Francisca Piaz, in San Patricio County, TX on December 2, 1961. He was the youngest of 7 children and loved the idea that he was cherished by his older siblings. Lupe’s most valuable treasures in life were God’s gifts of children, grandchildren, and his closest friend/wife of 20years (Irene). His devotion to his family and his firm belief in God are highlighted attributes of his character.   Lupe was approachable and invoked the essence of “Never met a stranger” phrase. He took pleasure in meeting new people and listening to their life stories. Giving free advice and encouraging others to never give up in life situations. Lupe was a hardworking man that achieved success as a truck driver and an entrepreneur. He delighted in good food, music, and time spent with family and friends. His youthful spirit often led to adventurous family vacations or weekend trips. His appetite for learning new things formed a passion for tinkering with automotive repairs. Lupe was a problem solver and always knew that God had him in the palms of His hands. He is dearly missed by his loved ones, who celebrate the fact that he is at peace with his creator. Lupe is survived by his wife, Irene Torres; his sons Nasario Torres and Edward Saenz (Brittany Saenz wife); his daughter Vicky Quilantan (John Quilantan Husband) his grandchildren John Lee Quilantan, Brianna Quilantan, Tristian Saenz, Brynlee Saenz and his brothers, Juan Torres and Nasario Torres. He is preceded in death by his sisters, Lenore Torres, and Francis Torres; Brothers Joe, Jessie, and Lino Torres; his parents; and his son, Guadalupe Chris Jr Torres. Visitation will be at Grace Funeral and Cremation Care located at 1211 Lubbock Road in Brownfield on Monday December 7, 2020 from 5pm – 8pm. Services will be held at First Baptist Church of Brownfield on Tuesday December 8,2020 at 10am with Pastor Matthew Baird officiating. Flowers can be sent to Grace Funeral home at 1211 Lubbock Road Brownfield, TX 79316. Prayers, condolences and memories are gladly accepted at itorres35@yahoo.com.
To order memorial trees or send flowers to the family in memory of Mr. Guadalupe Torres Resident of Lubbock, please visit our flower store.