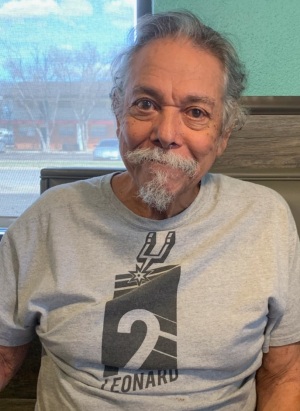 Jose Guadalupe S. Mojica “Wally” at the age of 75 years old went to be with the Lord Thursday November 19th, 2020. He passed away at 1:05pm at University Medical Center in Lubbock, Texas. Guadalupe was born on December 6th, 1944 in Lockhart, Texas to Blas V. Mojica and Nasaria S. Salazar. He graduated from Lockhart High in 1966, served in the Navy and was a Vietnam Veteran, and he retired as an Untied States postal carrier. Guadalupe played the guitar in the church choir at Our Lady of Grace, and he was also a Cursillista. He enjoyed fishing, singing, and playing his guitar, he liked cooking BBQ for loved ones, and he loved his grandchildren. He also came from an incredible military family where he was one of ten siblings, seven of which served in the military. He is survived by a daughter Billie Jo Perez (husband Alfredo) and her three children Mathew Irving (wife Danielle), Brian Perez, and Cheyenne Perez., and a son Jose Guadalupe Mojica Jr. He is also survived by two beautiful great-grandchildren. Guadalupe was also a stepfather to Carlos Soto and his three daughters Alexa, Isabelle, and Camille, Adalina Lawson and her daughter Ashlie Aguirre, Luzmila Evans and her son Luke Saldivar, Lupita Holguin and her two sons Ben Nathaniel and Devin Lopez, Favi Soto, Mario Holguin. Guadalupe was a brother to and survived by a sister Natalia M. Salazar and five brothers Blas S. Mojica Jr. (wife Mary Lou), Cresencio S. Mojica (wife Amy), Basilio S. Mojica, Antonio S. Mojica (wife Delia), Edward S. Mojica (wife Yvonne), and a sister-in-law Theresa C. Mojica wife of recently departed Leonard S Mojica. He is preceded in death by his parents, grandparents, one sister Mary Alice Espinoza, and two brothers Ricardo S. Mojica and Leonard S. Mojica. Time: December 19th, 2020, at 10:00 am Services will be held at: Saint Mary’s Catholic Church 205 W. Pecan Lockhart, TX. 78644
To order memorial trees or send flowers to the family in memory of Mr. Jose Guadalupe "Wally" Mojica Resident of Lubbock, please visit our flower store.