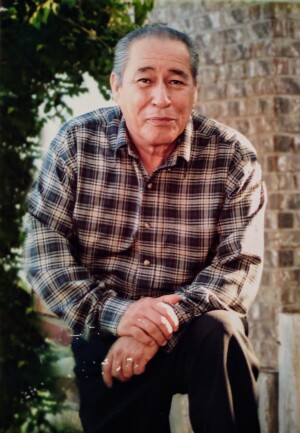 Martin C. Herrera was born to Martin Morales Herrera and Isabella Chavez Herrera On November 19, 1943 in Pecos , Texas. Martin perished at UMC in Lubbock, Texas on January 14, 2021 at the age of 77. Martin was a lifelong resident of Terry County spending most of those years in Brownfield. As a young man Martin along with his parents and siblings made the journey to Arizona and New Mexico where they joined other migrants in harvesting the crops from the fields and fruits from the orchards. Martin also spent time working at the San Marcos Golf Resort, where he started his employment as a dishwasher and was subsequently promoted to cook where he learned and refined he’s culinary skills. After years of following the way of the migrant the family settled in Wellman, Texas. Martin attended, what is currently the Wellman-Union ISD.  During his residency in Wellman he was employed as a farmhand and a service station attendant. Martin left Wellman in the mid 1960’s and settled in Brownfield where he made a living working for Lindsey’s True-Value Hardware Store for many years. Martin was preceded in death by his beloved parents Martin and Isabella Herrera of Brownfield, and sisters Carmen Contreras of Brownfield, Rita Navarette of Odessa, Tx, Esperanza Rodriguez of Chandler Az., and Anita Anaya of Brownfield. Martin will be lovingly and fondly remembered by his children Paul (Linda) Herrera, Amarillo,  Israel (Irene) Herrera, Brownfield, Angie Herrera, Brownfield, Irma (Stacy) O’Bryan, Mantar, Ks. Elizabeth (Samuel) Gardea, Midland, Laura Herrera and life-partner Liz, Phoenix Az., Martin Herrera III, Hickok, Ks., Edward (Becky) Herrera, Lubbock, and Roxane (Saul) Falcon, Brownfield. Martin is also survived by his much beloved sisters Consuelo (Enrique) Ramirez of Midway, NM., and Mary Lou (David) Anaya of Lubbock, Tx. Martin will also be missed by his 31 grandchildren, 55 great grandchildren, and numerous nieces and nephews. His children would like to thank Savannah’s Mexican Restaurant, Palacios Restaurant, and The Platinum Steak House in Brownfield for the love, kindness and compassion they exhibited to our father throughout the years. Martin loved and excelled in playing the guitar, singing, and giving nicknames to his grandchildren. He also had a passion for helping people. He was well known by many people throughout West Texas and New Mexico as “El Sobador”. An interesting fact about Martin’s heritage is the fact that his great uncle Manuel Morales, and uncles Viviano, Pedro, and Severiano along with numerous others were massacred by the Texas Rangers, US Cavalry Soldiers and local ranchers at a location in Presidio County, Texas which is infamously known as the Porvenir Massacre which occurred on January 28, 1918. Martin’s father was left and presumed dead after being struck in the head with the butt of a rifle.  https://www.porvenirmassacre.org. Pallbearers: Israel (Cholo) Herrera Jr., David Lee (Oso) Perez, Emilio (Chivo) Perez, Eduardo (Lalo) Mendoza, Martin (El Cuatro) Couvillon Herrera, Edward Sidney (El Zorrillo) Herrera; Honorary Pallbearers: Genaro Angel (Mighty Joe) Laredo, and Alexander (El Gallo) Andrade.  Family and friends will celebrate his life on Wednesday January 20, 2021 at 10 a.m. at Grace Funeral Care followed by burial in Brownfield Cemetery. Visitation will be held from 5-8 p.m. on Tuesday January 19, 2021 at Grace Funeral Care.  Service entrusted to the professionals of Grace Funeral Care Inc.  ~ When You Desire The Best of Service ~
To order memorial trees or send flowers to the family in memory of Mr. Martin Herrera Jr. Resident of Brownfield, please visit our flower store.