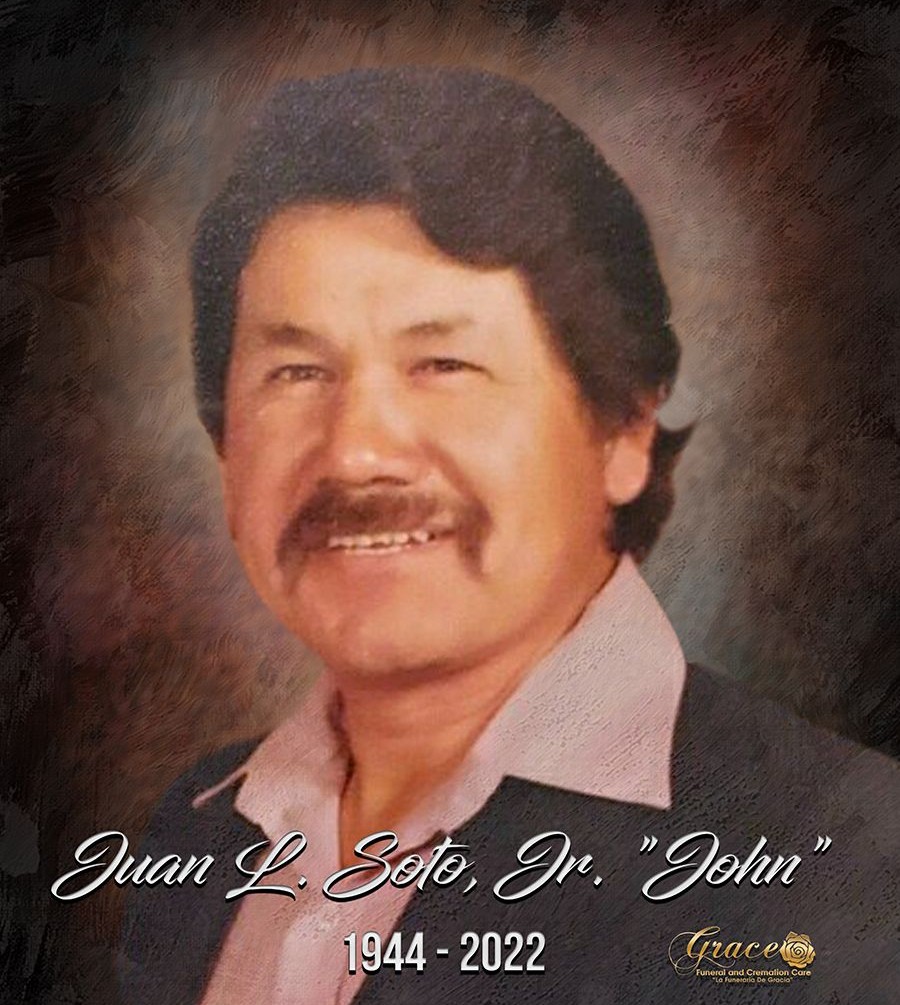 Mr. Juan L. Soto “John” 77, of Meadow passed away peacefully into the arms of Jesus on Friday September 16, 2022, in San Angelo, Texas. A visitation will be held Friday September 23, 2022, 5-8 p.m. at Grace Funeral Care Lubbock chapel located at 6604 Interstate 27. A service celebrating his life will begin at 11 a.m. Saturday September 24, 2022, at Frist Baptist Church in Meadow. He will be laid to rest in the Meadow cemetery.

Juan was born December 6, 1944, in Del Rio, Texas to the late Juan Soto Sr. and Caterina L. Soto. Juan also known as “John” married the love of his life Jesusa S. Soto on May 24, 1964, and to this matrimony was born 4 biological children: Kristina, Laura, Abigail, and Joel. “Soto” as nicked named by his wife, was a hardworking man and a strong believer and servant of Christ along with Jesusa. He traveled many cities throughout Texas and abroad preaching and teaching the Gospel. He simply was the hands and feet of Jesus reflected in the earth after his life was changed and he received the Lord as savior.

Juan entered the ministry thus starting the ministry of evangelism in the early 80’s and shortly after began his pastoral ministry as the Pastor of Templo Calvario in Muleshoe, Texas. He remained faithful to this ministry for 7 years before returning the mission field evangelizing. Pastor Soto was then called into pastoral ministry again and served in Denver City from year 2000 – 2003 and then moved to Meadow where he and his family officially settled and resided until his passing. Juan loved to sing praise and worship, enjoyed family time, and was a friend to everyone thus never meeting a stranger. Juan also loved his pet duck and dogs. He loved to travel to different cities. His dedication to the Lord continued as he read and studied the scriptures, prayed for others, and played his “Bajo Sexto” as worship. Pastor Soto not only worked as a pastor but his love for building and creating things with his hands afforded him the opportunity to work as a carpenter, building houses.

Left to cherish his memories, are children; Kristina Soto-Chacon (Juan Carlos), Laura Zavala (Robert), and a special adopted daughter/granddaughter; Amanda Vega-Martin (Gregory). He also leaves to cherish his memory 14 grandchildren and 19 great-grandchildren, his pet duck Aflac and a host of other relatives, friends, and ministry cohorts.

To order memorial trees or send flowers to the family in memory of Pastor Juan "John" Soto Jr. Resident of Meadow, please visit our flower store.