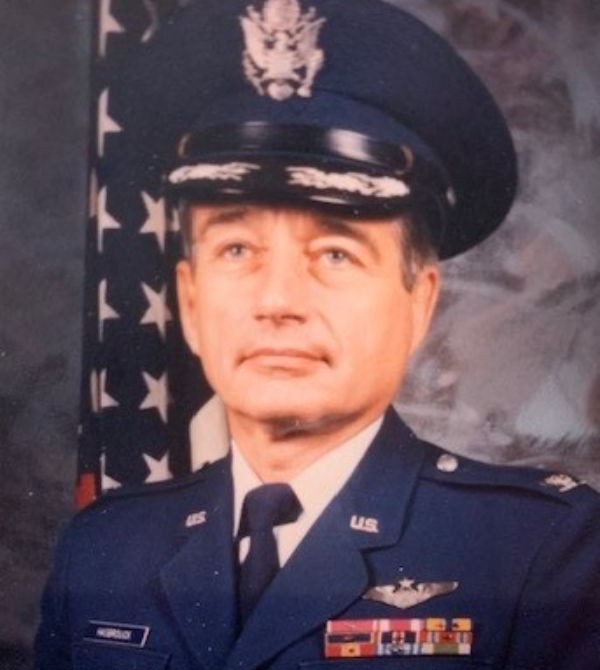 
Lubbock, Texas, - Col. Lawrence “Larry” Hasbrouck, III , US Air Force retired, age 90, of Lubbock Texas, previously Ocean Springs, Mississippi, passed away peacefully at home after a short illness surrounded by family members on Thursday, October 14, 2021. Larry was born on May 20, 1931 in New York City, New York to his parents Lawrence and Margaret Alexandra Hasbrouck. Larry is survived by his loving wife Betty of almost 50 years. Larry graduated from Nyack High School, New York in 1949 where he was a member of the National Honor Society, President of the Student Body, and athlete on the longstanding Indian football, tennis, and wrestling teams. He was voted in the school yearbook as “Done Most for the School” along with his known likes of politics and arguing. Upon high school graduation, Larry attended Colgate University in Hamilton, New York where he was known as “Mr. Colgate” serving as head cheerleader for the Red Raider cheerleading squad. He was a member of the Phi Kappa Psi Fraternity and he graduated in 1953 with a Bachelor of Arts degree, was commissioned through the Reserve Officer Training Corps program as a Second Lieutenant in the United States Air Force and was recognized as a Distinguished Military Graduate. Larry was most proud of his military service to his country. He was a true patriot and a hard core Republican through and through and was of the Baptist faith. Larry loved the history and traditions of the United States Air Force and his many military assignments took him overseas and across the continental United States. Larry was awarded the Air Force Commendation Medal, the Meritorious Service Medal, National Defense Service Medal, Air Force Outstanding Unit Award, and the Legion of Merit. Larry also received a Master’s in Business Administration degree from Ohio State University in 1967 and a Doctor of Philosophy in Management degree from Pacific Western University in 1987. He began as a personnel officer serving at locations such as Lajes Field, Azores, Scott Air Force Base, Illinois, and McGuire Air Force Base, New Jersey. His career took a different path as he volunteered to become an Intercontinental Ballistic Missile Launch Officer for the Minuteman program and served 13 years in the Strategic Air Command (SAC). He was a senior instructor in the ground system at Ellsworth Air Force Base, South Dakota and Chief of the Airborne Launch Control System at Headquarters SAC, Offutt Air Force Base Omaha, Nebraska. Larry is forever credited with bringing the Airborne Launch Control System training program to new heights ensuring the proficiency of the combat crewmembers and activation of the new airborne weapon system in support of Operational Test launches of Minuteman missiles at Vandenberg Air Force Base, California. Larry was the 510th Strategic Missile Squadron Commander and later Deputy Commander for Operations at the 351st Strategic Missile Wing, Whiteman Air Force Base, Missouri. The last 8 years of his career, he served as the Air Force ROTC Department Head at Lehigh University in Bethlehem Pennsylvania, and finally as the ROTC Air Force Northeast Area Commandant for 37 colleges and universities, retiring in 1983. After his military service, Larry and Betty retired on the Gulf Coast of Mississippi residing in Ocean Springs. Larry was an exceptional writer and loved teaching and after retirement, he served on the faculty staffs at William Carey College, the University of Southern Mississippi, Mississippi Gulf Coast Community College, and Embry Riddle University and was Dean of Phillips Junior College. Larry was also a licensed real estate broker and was a Career Development Manager with Prudential Bailey Real Estate. He later founded the Real Estate Training Institute in 1998 serving as the premier training provider for Real Estate Professionals in Mississippi. Additionally, Larry authored and published a book “The Changing Culture of the Missileer” in 2016. If you ever spent time with Larry, you definitely had a great time listening to his Colgate Red Raider and Air Force Cold War stories over and over again. He is preceded in death by his beloved parents, Lawrence “Doc” Hasbrouck, Jr. and Margaret Alexandra “Sandy” Hasbrouck of West Nyack, New York. Larry is also survived by his children, William (Jenny) Hasbrouck of Huntsville, Alabama; Kathryn (Lonnie) Eggers of Omaha, Nebraska; Sandra (Tom) Ryks of Bellevue, Nebraska; and Lawrence (Amy) Hasbrouck IV of Lubbock, Texas; his step-children Joseph (Dana) Hasbrouck of Wimberley, Texas; Leslie (Keith) Carraghan of Gulfport, Mississippi; David Manzer of Wimberley, Texas. He also leaves behind beautiful grandchildren Lexie Ryks, Ashley (Ben) Pendergrass, Tess Hasbrouck, Matthew Manzer, Emma Manzer, Lawson Hasbrouck, Mollie (Trevor) Rockstad, and Evan Carraghan, and great grandchildren Ren and Rory Rockstad and twins Jack and Levi Pendergrass. The family wishes to thank the many nurses and professional staff at UMC Amedisys Hospice and the caregivers of Home Instead of Lubbock Texas for their care of “The Col” during his illness. The Family requests donations be made in his remembrance to the Maroon Council at Colgate University, the American Cancer Society, or a favorite charity of your choice.


Grace Funeral and Cremation Care of Lubbock Texas is honored to serve the Hasbrouck Family. Larry will be cremated in Lubbock Texas and a Celebration of Life Service will be scheduled at a later date and will be conducted at Bradford-O'Keefe Funeral Home, 2511 Pass Road, Biloxi, MS prior to internment. Larry will be laid to rest with full military honors at the Biloxi National Cemetery, Biloxi, Mississippi at a future date scheduled for family members and friends to attend.

To order memorial trees or send flowers to the family in memory of USAF RET. Lawrence Hasbrouck III Resident of Lubbock , please visit our flower store.